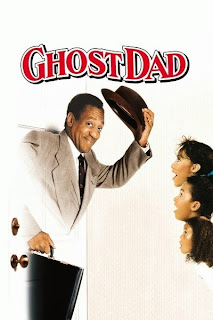 There is no excuse for this movie. It was directed by Sir Sidney Poitier, Oscar-winning actor, Bahamian ambassador, and Medal of Freedom recipient. It featured Bill Cosby, who in 1990 was probably the biggest sitcom star in America. You would think they couldn't go wrong even if they had tried. But they rose to the challenge.

Dr. Cosby plays Elliot Hopper, a successful, living businessman who is just days away from securing his family's future by landing a big account. He is the widowed father of several children, only one of whom (daughter Diane) plays a substantial role in the story. Elliot seems to have it all, until one day, he dies.

Of course, with a title like Ghost Dad, it's a foregone conclusion that Elliot is going to be dead by the end of act one. The movie toys with the audience by making us think he'll expire in an elevator accident, but no, that would be much too commonplace for what this picture has in mind. Instead, Elliot makes the fatal mistake of accepting a cab ride from a deranged, violent, psychopathic Satanist. (I'm not making a joke; the character is explicitly said to be a devil-worshiper.) In a fit of lunacy and a painfully drawn-out, unfunny stunt-driving sequence, the cabby drives off a bridge, and Elliot drowns in the river below.

I have no idea why they chose this as the means by which Elliot becomes a ghost. It is a truly surreal viewing experience. Moments after he dies, Ghost Dad climbs out of the river and recoils in terror as a bus barrels down on him. Of course, being a Ghost Dad, he is unharmed; but the real point is that a bus accident would have been a much more reasonable way to kill this character. So would the elevator crash we were teased with minutes earlier. So would anything.

Elliot is relieved to learn that, in spite of being a Ghost Dad, he can still be seen, albeit only in the dark. He can also communicate by mental telepathy, but conveniently for the filmmakers, he has to move his mouth as if he were really talking. He can even touch solid objects if he really makes an effort. So don't be confused by the utter lack of any visual or auditory clue; he is still a ghost.

A man named Sir Edith summons Ghost Dad to London, where he tells him that he will be permanently passing into the great beyond in a few days' time. Why Sir Edith has the power to summon ghosts is not satisfactorily explained. Back at his home, Ghost Dad explains to his kids that he will be returning to work so that he can make sure he secures their financial well-being before vanishing forever. The kids all seem awfully unfazed by the revelation that their father is now a disembodied spirit, and everyone takes it for granted that once he lands this business deal, they will be just fine without him.

In the movie's climax, Sir Edith travels to the Hopper household to tell everyone some big news. It turns out that Elliot isn't dead—he's only in a coma, but since his body was found with no ID, the authorities haven't contacted the family. Apparently there is a trait that runs in families that causes the souls of comatose people to exit their bodies, and the Hopper family carries the gene. This explains, says Elliot, why his father was also a Ghost Dad years ago. Maybe I just wasn't paying attention, but I'm 100% sure this seemingly relevant fact was never mentioned up to this point.

Just as the Hoppers are on their way to the hospital to reunite Ghost Dad with his body, Diane takes a nasty fall down the stairs and goes into a coma. At the hospital, she reveals that she has become a Ghost Daughter and has no desire to re-enter her body. After about 90 seconds of dialogue, Elliot persuades her of the folly of this decision, so Ghost Dad and Ghost Daughter rejoin with their bodies and come back to life.

In the final scene, Ghost Dad (now Normal Dad again) encounters the Satanist from earlier in the movie. He orders the Satanist to go directly to hell and sit on a hot coal until it snows. I'm not sure if we're supposed to assume the Satanist is going to kill himself or what, but it's an extremely disturbing way to end the movie. Couldn't Elliot at least have called the police? Why is the Satanist still alive anyway? He fell into the river too.

Before I conclude this review, I should mention that there were a couple of plot threads I didn't mention, including a scene where Ghost Dad helps his son perform a magic act, a subplot about Ghost Dad falling in love, and an adventure involving a conniving neighbor who learns Elliot's secret. (I omitted this last one out of a desire not to demean the titan of a young actor who played the neighbor by mentioning his connection to this movie.) If you really want to know about those scenes, you'll just have to watch the movie. But be forewarned that it is