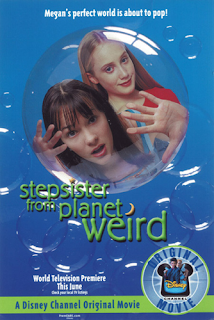 I'm skipping Don't Look Under the Bed, which I may or may not have seen, but all I remember is that Eric "Ty" Hodges, II, from Even Stevens was in it.

So what can I say about Stepsister from Planet Weird? I think I already tipped my hand in my Genius review that I don't like this movie. But I guess I do have to give them credit for giving it the stupidest, most uninspired title possible. Most people wouldn't have had the guts.

This movie stars Courtnee Draper, who was something of a Disney Channel institution in in those years. She had played the love interest of a mer-person in The Thirteenth Year and one of the leads in The Jersey. In this movie, she plays exactly the same character as in both of those, but now she has a stepsister from the planet Weird. (I don't think the girl's home planet was actually called Weird, but it might as well have been.)

Courtnee Draper's character is named Megan Larson, and her divorced mother has recently started dating again. The suitor is a mentally unstable person called Cosmo Cola, who supposedly hails from the Yukon. In spite of the unbelievability of this story, and the fact that "Cola" is not a real name, Megan's mother seems to accept it.

Cosmo's daughter Ariel is also very strange, but for some reason no one but Megan notices this. It's like an episode of Green Acres or something, where Megan is the Only Sane Woman alive. Everyone else at her school thinks that Ariel is a fascinating and likable person. Little do they know, she's actually a vaporous being from the planet Weird, exiled from her homeworld to walk among earthlings in a fleshy disguise.

I have no idea how people from Weird are able to transform themselves into solid objects when they travel to earth, but I'm not sure it matters. Ariel repeatedly complains that she "fears the wind," but why? If she's made of gas on her homeworld, why does that mean she is afraid of moving air? I am solid, but I'm not afraid of dirt. Anyway, an evil overlord from planet Weird travels to earth to destroy his arch-nemesis Cosmo Cola. The crown prince Fanul, Ariel's beloved, betrays his dastardly father, whom the earthlings kill with a leaf-blower. All of these things actually happen in the movie.

That's about it for this one. I'd say stick with The Jersey. At least there you get to see sports celebrities pretending to be 12-year-old kids.